Purlie Productions Heating up this Summer!

Purlie Production’s Summer Theater Camp is now ending it’s 3rd week and preparing a unique production of “Alice in Wonderland” (by Brainerd Duffield with special permission by Samuel French). All the characters you know and love or hate will be present at two performances at Okefenokee Heritage Center on July 2 and 3rd at 6 p.m. This play is directed by Joey Timmons, Camp Director, with the able assistance of Kimberly Beck.

In August, Purlie Productions will begin auditions for the fall play “One Flew Over the Cuckoo’s Nest”. Auditions will be held at OHC on:

Some changes have been made to the audition process: casting will be “gender and age fluid” according to Purlie Productions President Barbara Griffin. What does this mean? “As we have recently successfully presented a production of Shakespeare, we realize that skilled actors can perform many roles outside their comfort zone.” While this play calls for primarily male roles, we are going to be creative and welcome all to audition!

Join us at the Okefenokee Heritage Center for our Purlie Productions presentation of Alice and Wonderland starring our 2018 Drama Summer Camp Students!

The campers of Purlie Production’s 2018 Summer Camp are in rehearsals for their production of “Alice in Wonderland” (by Brainerd Duffield with special permission of Samuel French) to be performed at Okefenokee Heritage Center on July 2 and 3 and 6 p.m. Several of the actors will play 2 or more roles, expanding their acting versatility. The play is directed by Camp Director Joey Timmons, ably assisted by Kim Beck (who is also playing the dual roles of the Cook and the White Queen), Tom Strait, Jody Rollins (Technical Director) and Lamar Deal (Production Director). All of your favorite characters will be there, including the Dormouse, the White Rabbit and the Caterpillar. Kasen Quinn will play the lead role of Alice. Last seen in “Romeo and Juliet”, Emily Beck and Marisa Nino will play the Red Queen and the White Rabbit. Other cast members/campers are: Morgan Proctor, Katurah Williams, Jania Reese, Leah Brown, Elijah Morris and Triniti Harris. Call 912-285-4260 for more information. 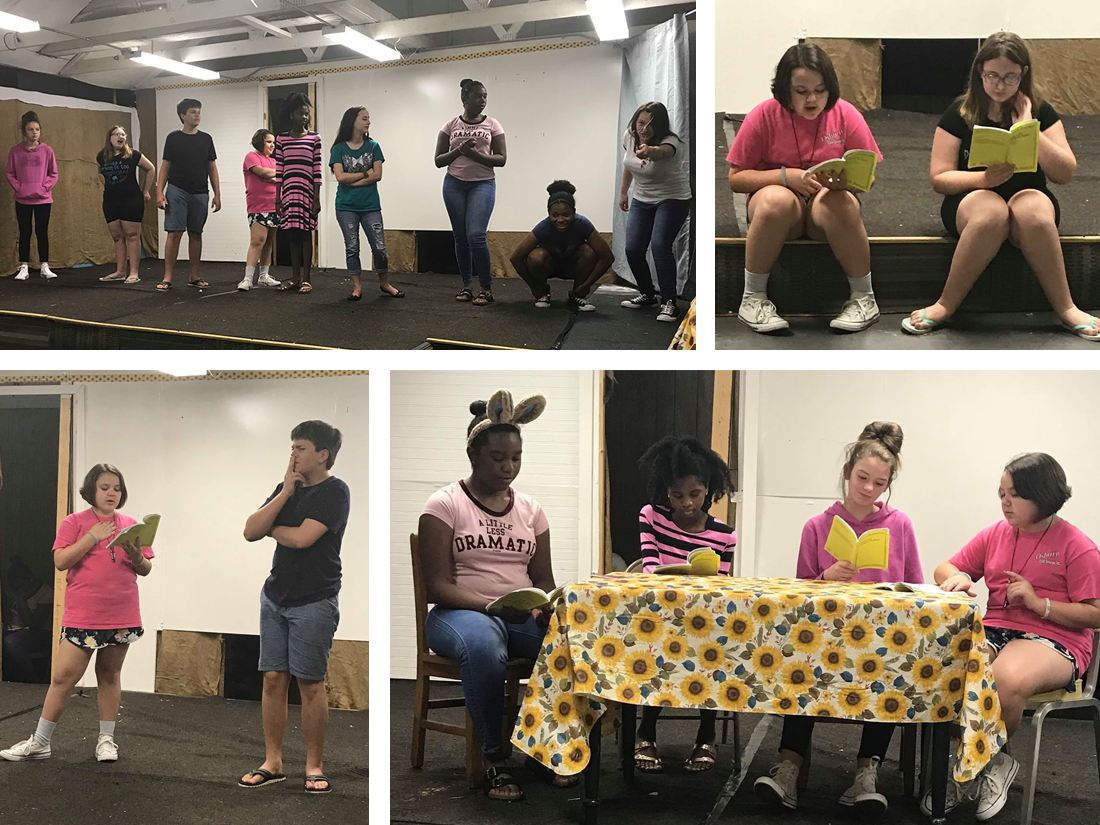 As posted earlier in June 2018

June & July 2018
Purlie Productions and the Okefenokee Heritage Center are proud to present the second annual Drama Camp. Students ages 8-15 have the opportunity to learn about leadership, teamwork, art, and creation through this amazing program.

Camp will run Monday – Thursday June 4th – 29th from 9 am – 12 pm. $50 will cover each student for the entire month.
This year students will be working on music and dance as part of the choreography as well.

Picture 1: Campers working on blocking a complicated final scene.
Picture 2: Ruby LeFand (Waycross) and Marisa Nunez (Waycross) practice for their production “On With the Shrew.”

The Heritage Center will be hosting an art and a drama summer camp this year.
Starting June 4th Purlie Productions will host a drama camp for students ages 8-16.
“This camp is so much more than acting,” volunteer and teacher Kimberly Beck said. “The students design the costumes, do hair and make-up, build and paint the set, learn about sound and lights, and develop leadership and teamwork skills.”
Camp will run Monday – Thursday June 4th – 29th from 9 am – 12 pm.
$50 will cover each student for the entire month.
A parent meeting is scheduled May 14th at 5:30 pm at the OHC 1460 N. Augusta Ave in Waycross.

The Heritage Center will be hosting another Fine Art Camp called Making a Masterpiece
July 9th – 27th. This year students will learn art styles from Ancient Egypt through Van Gogh and Frida Kahlo.
For more information, or to pre-register, contact the Heritage Center at 912-285-4260 or email okeheritage@gmail.com

Temporary Exhibit for the Entire month of October 2020

Registration for the Color Run is now open! This year's Color Run will raise money for the Youth Art and Drama camp at the Okefenokee Heritage Center, providing scholarships and opportunities for students to learn and grow in our community. The 5k will begin at 8 AM...
find out more

Crystal Murphy will be offering instruction on ukulele beginning in June. Classes will be every Tuesday from 2-3. Crystal was born in the North Ga mountains where she learned to play bluegrass fiddle. She is a graduate of the University of North Georgia with a degree...
find out more

“Dracula” by Steven Dietz, from the novel by Bram Stoker, with permission of Dramatists Play Service, will open Halloween night, October 31, at the Warehouse building at the Okefenokee Heritage Center.

“The Portnow Trilogy” is returning to Waycross at the Okefenokee Heritage Center, produced by Purlie Productions. Written by the well-known Waycrossan Barbara Griffin, who is also its lead actress, the three-part comedic play tells the story of an elderly couple who...
find out more

Registration for the Color Run is now open! This year's Color Run will raise money for the Youth Art and Drama camp at the Okefenokee Heritage Center, providing scholarships and opportunity for students to learn and grow in our community. The 5k will begin at 8 AM on...
find out more